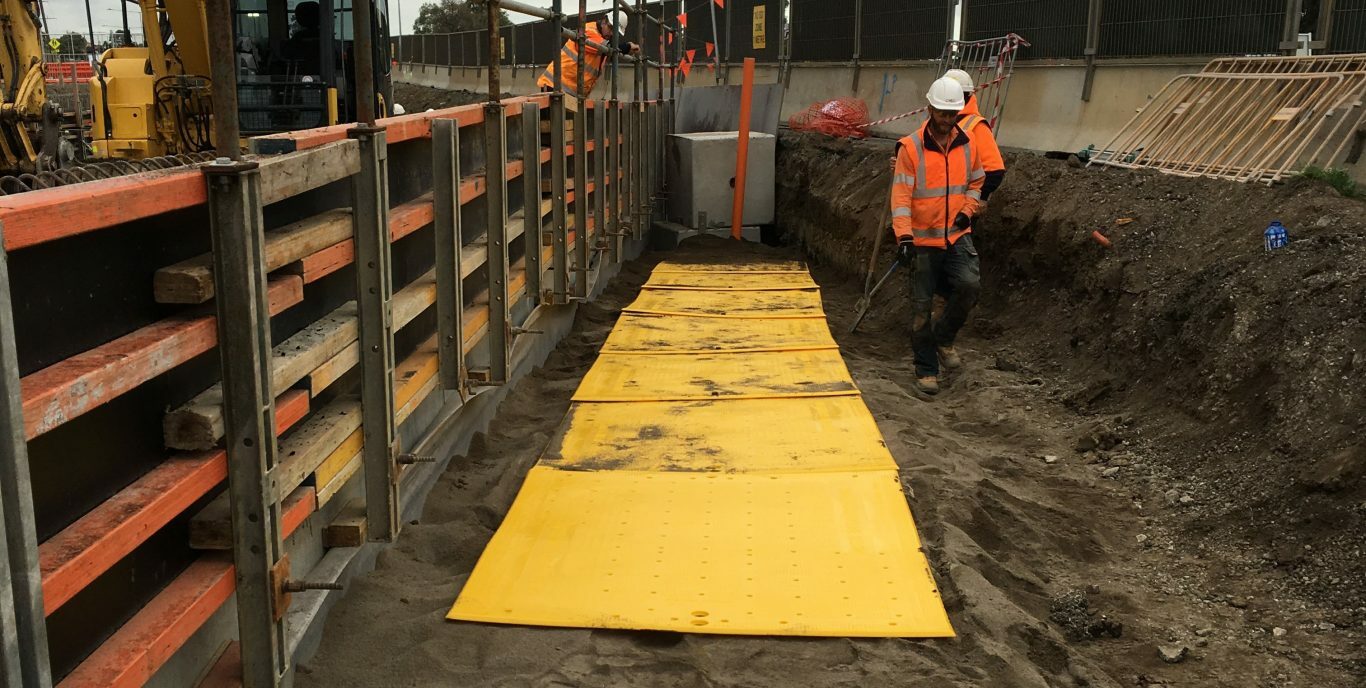 The issue encountered during construction was the vulnerability of critical buried power and communications infrastructure trackside, which could possibly be damaged from 3rd party excavation. Construction constraints meant normal depth of cover for this infrastructure could not be achieved. The engineers at John Holland approached Polyfabrics for a potential solution that would avoid the need to have to concrete encase or lay concrete slabs over buried conduits (increasing costs and making maintenance access difficult). A further issue created during construction was the requirement to cross and protect existing buried infrastructure.

The solution was the use of Overpipe protection plates.

Overpipe was developed for the gas sector, to protect high pressure gas pipelines from 3rd party damage by excavators or augers. Prefabricated concrete slabs had proven to be cumbersome to handle, expensive to install, of variable quality and not always effective as a penetration barrier. Overpipe is made from virgin HDPE polymer, is easy to handle and can be installed manually. Being shipped on pallets, the slabs are cost effective to transport and are very effective as a penetration barrier and warning device. The 15mm thick Overpipe plates will stop penetration by 36 tonne excavators as well as power pole borers.

SnakePit tracer wire test station, is buried just below the cast iron lid (yellow for gas on this sample). The plastic shaft extends up to 600mm below the surface.

Overpipe has replaced the use of concrete slabbing in Europe for pipeline protection and has now been adopted by all major gas utilities in Australia, including APA and Jemena. Once buried, the Overpipe plates will remain effective for centuries. They are also easily removed for maintenance access to buried utilities.

For the Mernda project, the 1500mm x 1800mm size Overpipe plates were used. The plates were customised for Metro trains, and manufactured in white with the embossed legend “WARNING COMMUNICATIONS CABLE BELOW” to comply with the projects colour and warning requirements.

The project required a total use of 3 kilometres of product.

A cost effective and practical solution, Overpipe can be made in any colour or with any custom warning message. The plates are 1800mm or 1500mm in length and are designed to overlap 100mm to ensure no penetration is possible where the plates meet. Overpipe plates come in different widths, to suit different trench sizes. They can also be cut down on site, with a power saw.

Polyfabrics are the exclusive distributors of Overpipe in Australia and New Zealand.